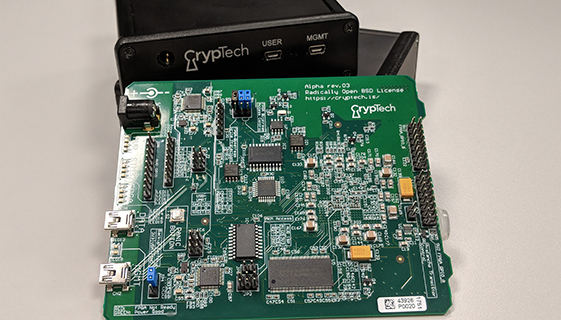 In addition to investments financed through the Internet Fund, The Swedish Internet Foundation has also recently chosen to support two important projects. The names of these are Cryptech and CeroWRT, and we think that both are important for the future of the internet.

Cryptech is a project that aims to improve safety on the internet. In many critical locations on the internet, there is a need for strong encryption and to enable secure management of cryptographic keys, strong protection of these keys is needed. Cyptech’s initiative is to create a free platform that makes it so that anyone who wants can build their own HSM based on the framework developed.

After whistle-blower Edward Snowden’s revelations, we have realized that key players have an interest in undermining the existing security solutions available. Cryptech is an important counterbalance to this and is a project that is in line with The Swedish Internet Foundation’s values.

What is being developed is a hardware design based on FPGAs and the goal is to be able to make use of hardware and software that can be audited by anyone to ensure that there are no built-in weaknesses in the system. This is very comprehensive work, and something that The Swedish Internet Foundation supports, as we want to see safer handling of keys for things like DNSSEC.

You can read more about Cryptech here: https://cryptech.is/.

The internet of things

CeroWRT is a project built on top of OpenWRT, a well-known free Linux platform for embedded systems. OpenWRT is often used to build routers and wifi base stations, but is increasingly being used in Internet of Things related projects. The primary purpose of CeroWRT is to fix problems that are not-so-known with unwanted delays in the network – a phenomenon known as bufferbloat.

In order to curb blufferboat, a lot of research is being conducted, and much of the research being done is implemented in the form of modifications to the Linux core. In practice, CeroWRT is used to run an entire network’s implementations with the latest bufferbloat management in order to show that it works in practice. The experience you get there can then be implemented in IP stacks that are also used elsewhere. CeroWRT is therefore a remarkable project that improves the internet in the long-term.

At The Swedish Internet Foundation, we have a role to play when it comes to improving the infrastructure on the internet, and that is why we give money to the projects.

You can read more here: http://www.bufferbloat.net/projects/cerowrt.